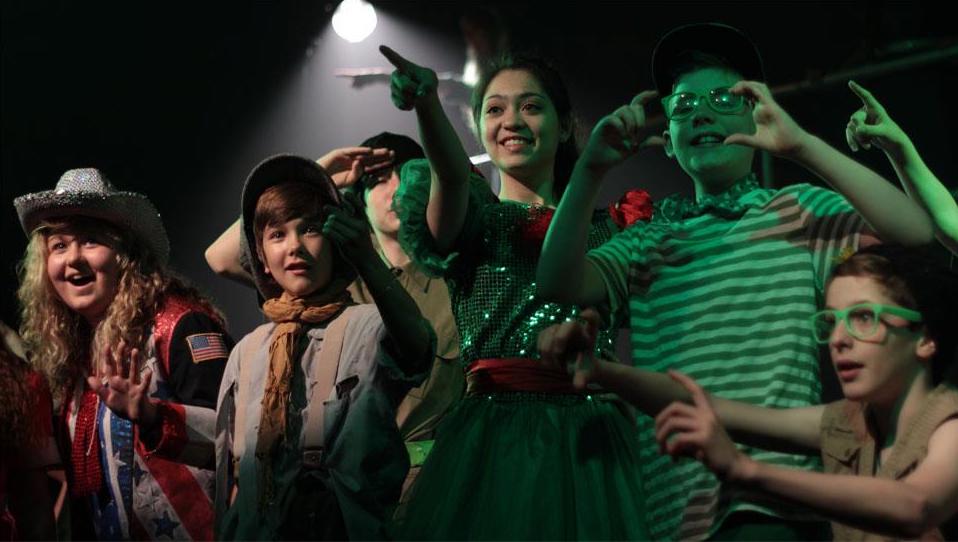 Auditions for the school started this month with a steady stream of young performers looking around and excited to be in our theatre showing us what they love doing.

The LAMDA Speech and Drama certificates arrived for exams taken just before the summer holidays.  These will be given out by Gillian, our speech and drama teacher, next month in a special assembly.  Congratulations to all – 90% passing with Distinction and 10% with Merit. These are exceptional results, especially for the pupils sitting grade 8.

Year 11 have written the Christmas Show, “The Elves Who Saved Christmas” and this will be performed by years 10 & 11 on the 4th and 5th December, as part of the annual Barnet Christmas Fayre.  Tickets £5 are available on our theatre’s website www.thebulltheatre.com

The show will also be performed on Monday 6th through to Thursday 9th December to pupils from Underhill Junior School and a group of adults with learning difficulties from Mencap.  Our year 7, 8 and 9 will be performing a Christmas Carol Concert in Barnet Church on Sunday 5th December.

Our year 11s created a fun a murder mystery game to play with the whole school in the day before we broke up for half term.  Groups worked together to solve clues left all over the building and discover who murdered who and where.  Pupils’ costumes worn for the non-school uniform day were amazing.  Well, we are a performing arts school.

It is so lovely to see everyone back in school in person, and to welcome some new faces.

In assembly we voted in class reps and buddies for each year group and handed out badges.  The year 11 pupils who were standing for Head Pupil, gave their campaign speeches, and Amber Fernee was voted Head Pupil with Ivy Pratt as her Deputy.   The girls have decided to organise a dance warm up session every Wednesday morning at 7.30am-8.30am in the Dance Studio.  Something to blow away the early morning cobwebs midweek.

Our After School Clubs for this term are:

Monday – Street Dance, GCSE Dance, or one to one Musical Theatre

Lunch clubs so far include Chess and Music Clinic.

Three year 8 pupils – Andre, Sean and Benny were invited to see The Lion King the week before we came back to school.  Duane Lamonte, a guest teacher at the school, organised tickets for them and met them backstage.  What a great start to the year.

Congratulations to our year 9 pupils, Kerrika, Tyan, T’Myah and Gia who were winners in a National Creative Writing competition and whose stories will be published in “Unsolved Crime Scene Stories”.

Adelaide (yr10) has been busy filming “House of Dragons”, the prequel to “Game of Thrones”.

Abiola and Kaianne (yr8s) have had a great time filming on the set of “Eastenders”.

So good to be back in school.

explore
We use cookies on our website to give you the most relevant experience by remembering your preferences and repeat visits. By clicking “ACCEPT ALL”, you consent to the use of ALL the cookies. However, you may visit "Cookie Settings" to provide a controlled consent.
Cookie SettingsReject AllAccept All
Manage consent

This website uses cookies to improve your experience while you navigate through the website. Out of these, the cookies that are categorized as necessary are stored on your browser as they are essential for the working of basic functionalities of the website. We also use third-party cookies that help us analyze and understand how you use this website. These cookies will be stored in your browser only with your consent. You also have the option to opt-out of these cookies. But opting out of some of these cookies may affect your browsing experience.
Necessary Always Enabled
Necessary cookies are absolutely essential for the website to function properly. These cookies ensure basic functionalities and security features of the website, anonymously.
Functional
Functional cookies help to perform certain functionalities like sharing the content of the website on social media platforms, collect feedbacks, and other third-party features.
Performance
Performance cookies are used to understand and analyze the key performance indexes of the website which helps in delivering a better user experience for the visitors.
Analytics
Analytical cookies are used to understand how visitors interact with the website. These cookies help provide information on metrics the number of visitors, bounce rate, traffic source, etc.
Advertisement
Advertisement cookies are used to provide visitors with relevant ads and marketing campaigns. These cookies track visitors across websites and collect information to provide customized ads.
Others
Other uncategorized cookies are those that are being analyzed and have not been classified into a category as yet.
SAVE & ACCEPT
Powered by